The European Championship is an annual competition, traditionally taking place during the European Go Congress (EGC). The first EGC in which I participated took place in 2010 in Tampere, Finland. At that time, the tournament used the following format: the so-called “Main Tournament” was open to everyone, including guests from the Far East, and the European player who placed highest was crowned European Champion. Needless to say, the leaderboards were typically topped by strong Asian players. Since then, the tournament system of the European Championship has gradually evolved into a separate competition from the other events of the EGC: nowadays it’s open only to those selected from the strongest players of Europe.

The EGC that was to take place in Ukraine this summer was unfortunately canceled. As last year, therefore, this year’s European Championship was held online on OGS. Since the prize fund is normally raised from the EGC entree fees, the EGF faced the same problem as in 2020: it was necessary to provide a prize money pool in order to motivate the strongest European players to participate in the event, especially professionals who make their living with go. Last year’s solution was also this year’s: the EGF organized a crowdfunding campaign.

As last year I took third place in the European Championship, in this year’s edition I was among the seeded players who started directly in the knockout stage on the 27th of November. My first opponent was Viktor Lin 6d. Even though I won that game, I didn’t feel confident during it. After a long break between large-scale tournaments, more than two months for me in this case, I often feel like I don’t operate on full power during the first round; my mind needs one or two serious games in order to warm up properly. Perhaps football players walking out onto the pitch after a long hiatus feel the same way; they can’t play their best from the beginning.

In the second round I defeated Nikola Mitic 7d, who demonstrated high-quality play in the first half of the game, but later allowed victory to slip away slowly; when we counted the score, I ended up cinching the win by 2.5 points.

By the time the tournament reached the best-of-three semi-finals, only EGF professionals remained. While Ilya Shikshin 4p defeated Ali Jabarin 2p with a score of 2-0, Pavol Lisy 2p and I decided to play as many games as possible: I won the first game, lost the second one and finally succeeded in the third game.

Waiting for me in the final was Ilya Shikshin 4p, an opponent very familiar to me from the many times we have met over the board, often in the finals of various tournaments. Even though I have defeated Ilya in the early stages of different tournaments, I have never beaten him in any final and our head-to-head score is definitely in his favor – perhaps by around 70%.

This year’s European Championship final was no exception: I lost two games straight, the first by resignation on the 3rd of December and the second by 2.5 points the following day. In the match to determine third place, Ali Jabarin 2p beat Pavol Lisy 2p with a score of 2-1. As I reflect on my performance, I would say that in both games I put up a good fight and kept things competitive, but my opponent proved stronger in the end. In the next chapter, you will find my commentary on the second game of the final match between me and Ilya. 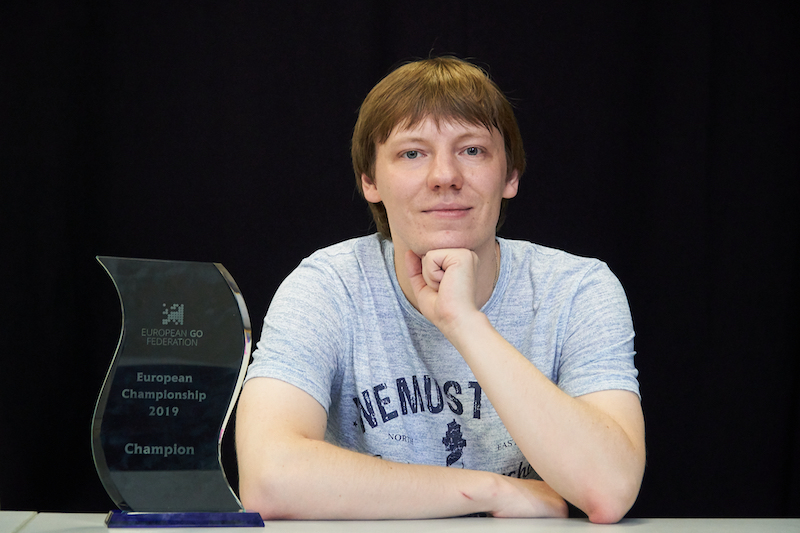 Ilya Shikshin after winning the European Championship 2019 in Brussels. Photo by Mikhail Krylov

For Ilya it was his eighth European Championship – an outstanding achievement, matching the record of Jürgen Mattern who claimed his eight championships between 1965 and 1979.

Despite falling at the final hurdle, I am pleased with my result in the tournament. Besides, I was glad to get in some serious playing practice before another important event – the Grand Slam, taking place less than two weeks after the conclusion of the European Championship.

I am thankful to the EGF for organizing this event, as well as to the go fans for supporting it and donating to the prize fund! Thanks to the shared effort of go community, the strongest European players had the opportunity to demonstrate their best skills in a fierce competition, and go fans enjoyed watching our games on OGS and the live commentary on the EGF Twitch channel.

After the tournament concluded, I asked Jean-Yves Papazoglou, Vice-President of the EGF and responsible for the Championship’s organization, to write a few words about the event; you can find his comments on the next page. 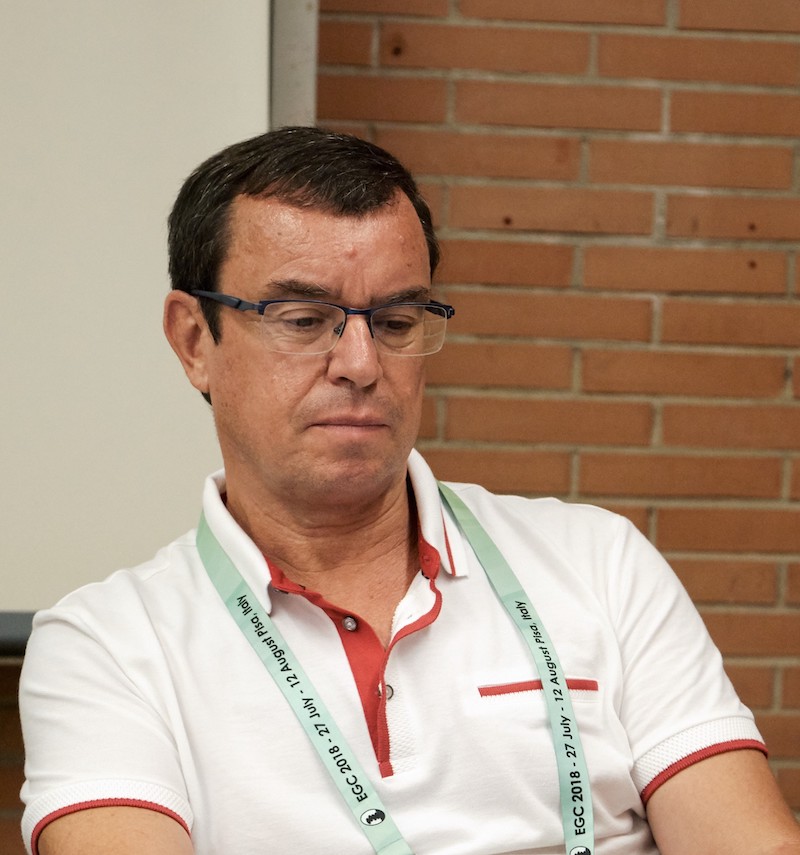 Jean-Yves Papazoglou at the EGC 2018 in Pisa. Photo by Mikhail Krylov

Jean-Yves: This year once again we were forced to hold the European Go Championship online due to the global health crisis. Instead of 32 participants, as in the previous three years, Martin Stiassny, EGF President, suggested a new formula with 24 players and group preliminary rounds similar to the FIFA World Cup. In order to reward the top eight players from last year’s Championship, they were directly seeded to the final bracket.

Perhaps, in the course of the whole tournament there was only one truly unexpected result: Nikola Mitic 7d winning against Andrii Kravets 1p in the first round of the final stage, congratulations go to him.

I am glad to report that there was not a single appeal nor any suspicion of cheating during the tournament. This was much appreciated by the organizing team: Lorenz Trippel, Martin Stiassny, Harry van der Krogt and I. Also, the semi-final and final games between the remaining four players were played with a high level of trust: they agreed to have no proctors, which had been suggested in the tournament regulations as an extra anti-cheating measure. This shows how professional our top players are during their games and outside of them. To be honest, we were confident even before the tournament that no proctors would be needed for the final games, since the top European players are so respectful to each other.

This year’s crowdfunding campaign was also a success; this year over €3,700 was donated by more than 110 go lovers. Hence, with a contribution from the EGF, the prize fund distributed between the top four players was €6,000 (for comparison, last year’s prize fund was €5,000). This was possible thanks to social media promotion done by Artem Kachanovskyi, as well as excellent benefits provided to the donors by the European Go Journal, AI Sensei and GoMagic. The EGF pros themselves also contributed commentaries on the top five games, as well as simultaneous games for Gold-level donors.

During the two-week tournament, we were also treated to live commentaries on Twitch by those EGF professionals not currently playing. From the hundreds of viewers, great thanks go to all of them for commentating so well and often so long!

Will Ilya Shikshin 4p increase his number of European Championships and set a new record with a ninth victory next year? We, the go community, will meet in Vatra Dornei, Romania for the 2022 European Go Congress to witness a face-to-face Championship and find out!