The European Grand Prix is an annual series of tournaments with the top-finishers collecting so-called “bonus points”, these tournaments include two events organized by the EGF – the European Championship and the Grand Slam – and various international competitions held by local organizers. Since 2017, the EGF has organized the Grand Prix Finale at the end of each cycle, to which the 16 most successful participants are invited: the winners of each Grand Prix tournament and the players with the greatest number of bonus points. The winner’s prize is around €1,400.

The idea behind the Grand Prix is to incentivize strong European players to attend various competitions all around Europe. Their presence, in turn, motivates weaker players to participate. The organizers of the bonus point tournaments pay a management fee to the EGF, and this money is used to form the Grand Prix Finale prize pool. With a sufficient number of Grand Prix events, the system can be financially self-sustainable.

In pre-pandemic times, the Grand Prix had shown consistent progress: from five tournaments in the first year (2014) to fifteen in 2019. The bonus points are also used as one of the criteria for selecting the European representatives for professional competitions in the Far East. This added an extra incentive for European professionals to attend even the smaller bonus point tournaments and thus better their chances of being selected for future international events. For most of the other strong players, the main benefit of collecting bonus points was the chance to participate in the Grand Prix Finale. This system worked well.

Unfortunately, the COVID-19 pandemic came and posed a real challenge to this arrangement: from spring 2020 almost all the competitions were canceled and the Grand Prix that year consisted of only six events, two of which were held online and the other four having taken place before the start of travel restrictions. Nevertheless, in January 2021 the EGF held the first online Grand Prix Finale, which was won by Ilya Shikshin, at that time a 3-dan professional.

Last year, three out of the seven Grand Prix tournaments were held over-the-board: the Moyo Open in Pardubice, the Dutch Open in The Hague and the Grand Slam in Belgrade. With restrictions on international trips gradually being loosened, I am convinced that the European Grand Prix will regain its previous popularity: the current cycle has just started, and there are already seven events in the Grand Prix calendar; all of them are planned to be held face-to-face!

I like to compare the tournament system of the Grand Prix Finale with the UEFA Champions League: the 16 participants are divided into four groups of four players and a round-robin is played out in each group in order to determine the two players that will qualify to the knockout stage. In the first round of the knockout, the players finishing first in their groups are paired up with the runners-up from the other groups.

The Grand Prix Finale 2021 started on the 22nd of January and was held on OGS. My performance in the group stage was flawless with three wins and no defeats, but in the quarter-final I lost to Nikola Mitic 7d who played a great game. 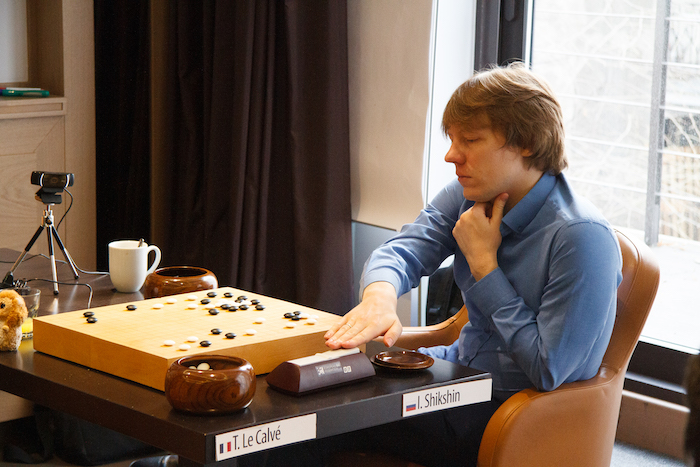 Ilya playing in the 6th Grand Slam Tournament in Belgrade in December 2021. Photo by Igor Vujanovic

It was Ilya’s third time winning this competition, following his successes in the 2018 and 2020 editions. In 2017 and 2019 the winners were Ali Jabarin and Mateusz Surma, respectively.

I decided to ask Ilya a few questions about the tournament:

Artem: Congratulations on your victory, Ilya! How did the tournament go for you?

Ilya: Thank you! I was a bit nervous before the start, however the tournament went quite smoothly for me: I made mistakes in my games, but somehow my opponents didn’t manage to punish them. I'm happy with the final result.

Artem: Which game was the hardest for you?

Ilya: I think it was my semi-final game against Ali Jabarin. My opening was not good enough and I was behind right up until the late endgame. I was a bit lucky to win that game.

Artem: What do you think about the final game against Pavol?

Ilya: We played out an opening that I used to play a lot before, so I felt rather comfortable with my position. Also, it seems that Pavol was unfamiliar with the post-joseki variations in the lower right corner: he made a mistake there and fell behind. After that I managed to keep my lead safe and didn’t give Pavol a chance to catch up.

Artem: Thank you for your time, Ilya! I wish you luck in the next edition of the European Grand Prix!

In the next chapter you will find commentary on the final game between Ilya and Pavol.