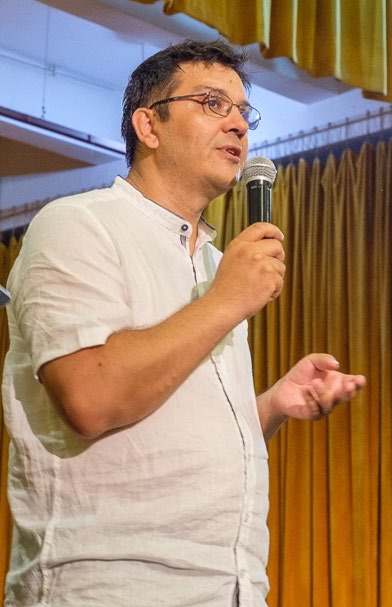 Cătălin during the Opening Ceremony of the EGC

This year’s EGC took place from the 22nd of July until the 7th of August after a two-year hiatus and amid many organizational challenges.

Held in Vatra Dornei, a beautiful town in the mountains of northern Romania, the Congress comprised the Pandanet European Go Team Championship, the European Championship and countless other tournaments.

As chief organizer, who better than to give us an insight into the background of the event and reflections on how it went than Cătălin Țăranu 5p?

Cătălin during the Opening Ceremony of the EGC

Artem: How do you feel now that the Congress is over?

Cătălin: After the congress there was a lot to do: paperwork, cleaning up the congress site, meeting people who supported the event and giving gifts, returning the EGF materials back to storage in Czechia and so on. I was almost alone in most of these tasks so it took some weeks until everything was done. Now I feel a bit burnt out and need a holiday and to spend some time with my family. Nevertheless, the positive feedback from most participants makes me feel proud of organizing the EGC under pretty difficult circumstances. If the participants were happy then our effort was worth it.

Artem: Can you tell us a few words about the organizing team you assembled for the EGC?

Cătălin: Last year we put out a call for volunteers from Romania, and later we expanded the call to international volunteers, as well. Quite a few people answered our call, most of them young go players that I hadn’t met before this congress. Some young players from our local club, as well as other friends from Vatra Dornei, also made a significant contribution to the preparation tasks and congress activities. Due to COVID-19 or personal problems, some volunteers couldn’t make it, however; in the end our team was a bit smaller than intended. Since we offered accommodation and/or meals to our volunteers, and also exempted them from paying the congress fee, this was the biggest expense we had and the balance was tricky. 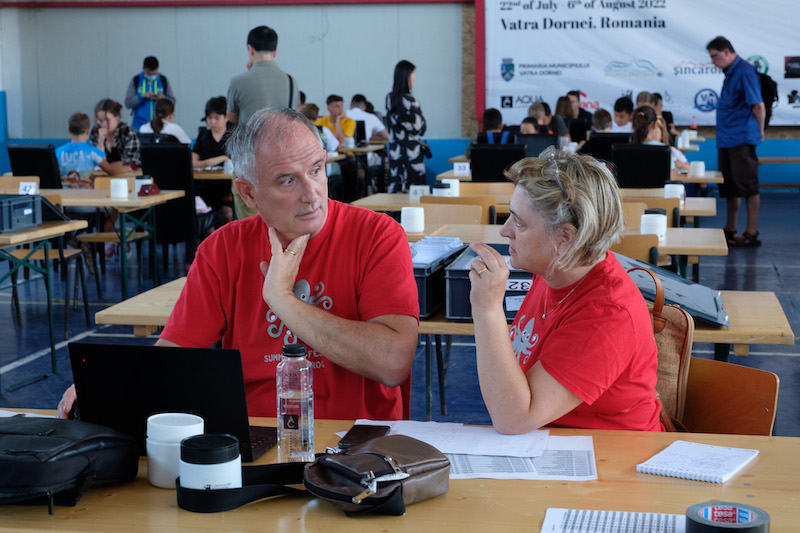 Nevertheless, a few more experienced people would have been very helpful, especially a few more playing hall referees, and we needed one more pairing master for the side tournaments. This put a very heavy load on tournament director Damir Medak, and pairings master, Pascal Müller, who both did an amazing job. I would like to use the opportunity to thank our team again for their efforts, we owe the success of our congress to them.

Artem: As a participant of the EGC, I know that we all enjoyed the event a lot. How did it go for the organizers? What was going on behind the scenes?

Cătălin: For me and my wife as the main organizers, there were many things that could have gone better, some that we had planned but didn’t happen in the end. Our little girl was born on the 5th of July, a very joyous gift that inevitably slowed our organization efforts in the very warm weeks before the event. We tried our best to help participants with travel and accommodation solutions, but this required a lot of energy and kept us really busy. Especially in the preparation phase, there were a lot of tables and chairs to transport to the main venue and it was difficult to find people to help. I carried most of the things myself. The team arrived just as the event started and after that it was much better, but I was already feeling sun stroke and had to sleep during some important moments at the start of the congress when I really should have been there. Also, some things didn’t go as planned with the team: we were short on playing hall referees, so people who had tasks outside or at the info point were often needed in the playing halls. We somehow didn’t have a chance to instruct the young people who ran the info point, so information about the town and excursions didn’t reach all the participants as I planned.

Artem: What were the hardest challenges in organizing the EGC?

Cătălin: This year’s EGC was quite unusual and full of challenges. First of all, we started on short notice at the end of April 2021, when the Ukrainian organizers decided it was necessary to pass the task to us. This meant we didn’t have the chance to promote our congress at the previous one as usual.

The registration went slowly, which made the budget estimations very difficult to anticipate – it was risky to engage in any kind of expense. I postponed the expenses as much as I could but still, sometimes you just have to go ahead and order or reserve something. By the end of April 2022, we assumed that people perhaps didn’t believe the congress would go ahead and postponed their preparations due to the ongoing pandemic. This had a bigger impact than I initially thought. It was very difficult to reserve some key locations and because of that I had to change the plan for the playing location of the European Championship. The war in February made things even more complicated and dissuaded hundreds of people that would otherwise have come. The COVID-19 situation in China also made it impossible for Chinese pros and participants to attend. 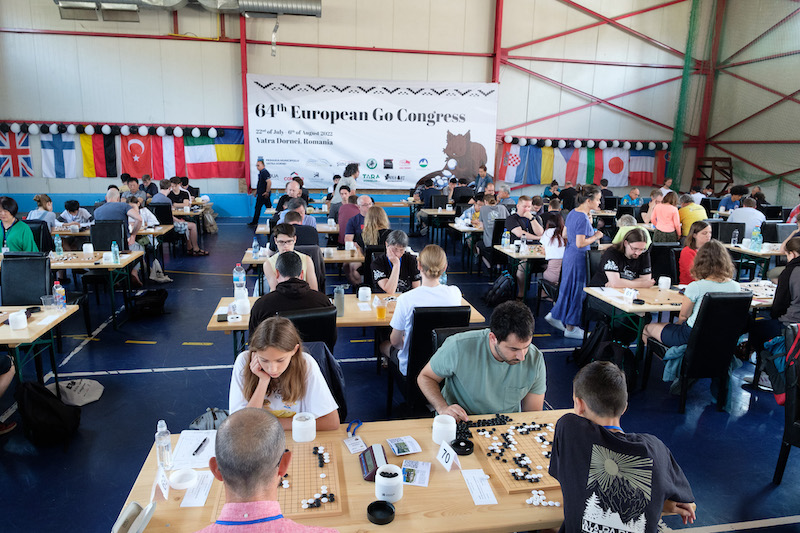 I kept hoping that Asian pros would join the congress, but in June I found out that none could come. Guo Juan 5p, who was supposed to come, had her flight cancelled at the last moment and couldn’t rebook it due to the chaotic scenes at airlines and airports. Also, for the first time I can remember, there was no international sponsor for the EGC. Due to Russia’s war in Ukraine, we decided to exempt Ukrainian players from paying entry fees and this also meant a few thousand euros less for an already tight budget. It looked like everything had aligned against our efforts; in the end the EGF had to step in and support the prize fund, otherwise the organization would be impossible.

For me the hardest thing was the constant uncertainty, I had to look for cheap solutions for everything I did and it was really stressful. I spent two weeks learning to use Wordpress and creating most of the website myself, in the end it was a blessing in disguise because, besides acquiring a very useful skill, I could also update the site as often as I wished. I am quite proud of the local community from the Land of Dorna who really understood the situation and helped a lot. The financial and logistical support of the Vatra Dornei City Hall was especially essential to our success.

Artem: Do you feel like organizing the EGC again in the future?

Cătălin: I don’t really see this happening. The Romanian Go Federation is not in the best shape of its history and I don’t know who would campaign for another congress in Romania, unless somehow the current situation changes radically. Personally I would enjoy being part of the organization team again and would gladly share my experience. For now I will focus on keeping alive the tradition of the Vatra Dornei Go Festival and the continuity of the SEYGO tour.

Artem: What are your final reflections on this year’s EGC?

Cătălin: In the end, considering the extreme situation we were in, the result is quite good. The most important part is that we managed to keep the congress tradition alive and offered people the chance to play on a real goban after quite a long period without large in-person events. I have wonderful people to thank for this, especially my wife, Martin Stiassny and the Medak family whose contribution was invaluable. Of course there are many others as well, the list of those who helped me make this congress a success would be too long to write here.

Artem: Thank you very much for talking to us, Cătălin, and especially for organizing an excellent Congress! 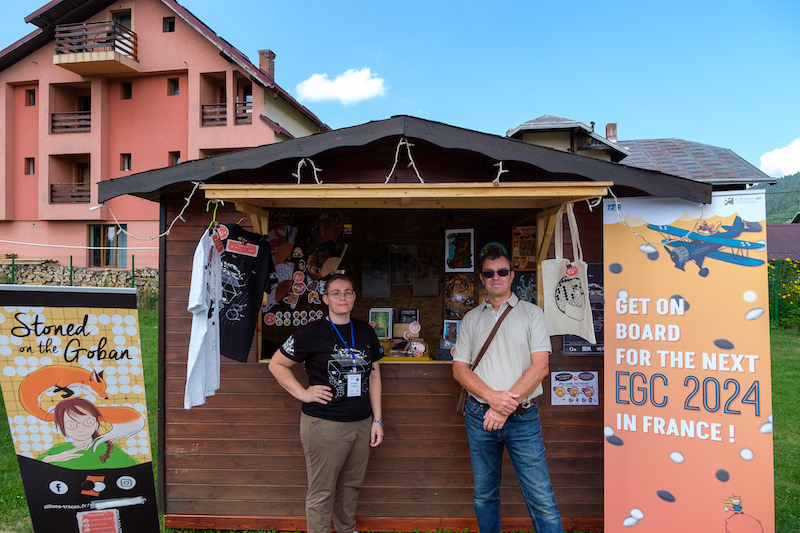 Camille Lévêque (left) and Jean-Yves Papazoglou, two of the organizers for the 2024 Congress to be held in Toulouse, France

Although the location of the 2023 European Go Congress is still unclear, the organizing team for the 2024 EGC have begun their preparations in earnest. Registration is already open, with excellent discounts for registering early. Be sure to block the 26th of July – 10th of August 2024 in your calendar, and check out the Congress’ stylish website at egc2024.org!