Once the birthplace and residence of Roman emperors, this year the storied city of Niš, Serbia, was the home of the European Pair Go Championship (EPGC). The EPGC had been scheduled to take place in Niš back in April 2020 but was canceled due to COVID-19 travel restrictions and postponed to the weekend of the 25-26th of September. It’s been great to witness a recent uptick in the number of over-the-board go tournaments in Europe. The championship brought together 15 pairs from 6 countries: Russia, Germany, France, Czechia, Slovakia and Serbia.

After six rounds, two Russian pairs were at the top of the tournament table, each with only one defeat. The pair of Ajgul Fazulzjanova 3d and Alexander Dinerchtein 3p, and the pair of Natalia Kovaleva 5d and Dmitrij Surin 6d were tied. Because the first tie-breaker – sum of opponents’ scores (SOS) – was also a tie, the fate of first place was decided by the outcome of their game against each other: the pair of Natalia and Dmitrij defeated their fellow compatriots in the third round and thus claimed the champions’ title. 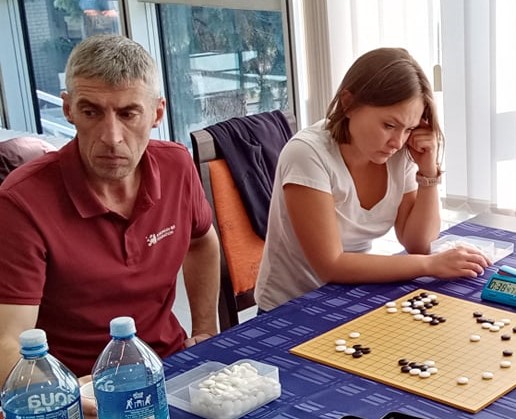 Natalia and Dmitrij during the last round of the EPGC 2021. Photo by the tournament organizers

The two leading Russian pairs were followed by a pair from Germany, Manja Marz 3d and Johannes Obenaus 6d, who only lost to the numbers one and two. Fourth in the final results was the French pair of Ariane Ougier 4d and Benjamin Dréan-Guénaïzia 6d. Interestingly enough, they defeated the winners but lost to second and third. Quite surprising, isn’t it? But it’s not uncommon for a pair go tournament to include such results.

I asked Natalia Kovaleva 5d, one half of the championship pair, some questions:

Artem: Natalia, congratulations on your victory! It is hardly your first. How many times have you won this tournament before?

Natalia: Thank you very much! This was the seventh time that Dmitrij and I won the European Pair Go Championship. I also won it with Oleg Mezhov once, so for me it’s my eighth title in total.

Artem: How did the tournament go? Was the atmosphere intense or rather friendly?

Natalia: I like pair go a lot. It’s much more emotional and unpredictable than individual competition. The tournament was indeed intense with many strong pairs participating, but at the same time there was a very friendly atmosphere. Everything went according to the motto of pair go: the bitterness of defeat is divided by two while the joy of victory is multiplied by two.

Artem: Which was the hardest game for you and Dmitrij?

Natalia: Hard to say. In the game against Manja Marz and Johannes Obenaus from Germany it seemed as if we were far ahead the entire game. But perhaps that was just my feeling. In the end we won by a mere half a point. If our opponents had played a little better in endgame, the final score might not have been such a happy one for us. We lost to Benjamin Dréan-Guénaïzia and Ariane Ougier from France. I can’t say any of the other games were easy at all, either. Even during the last game against Dita Vasova 1d and Vojtech Vasa 2k the pair from Czechia didn’t go easy on us and made us nervous.

Artem: Do you organize some special training sessions with Dmitrij before pair tournaments? Or does the understanding you have developed over the years of playing together allow you to just relax and play go? 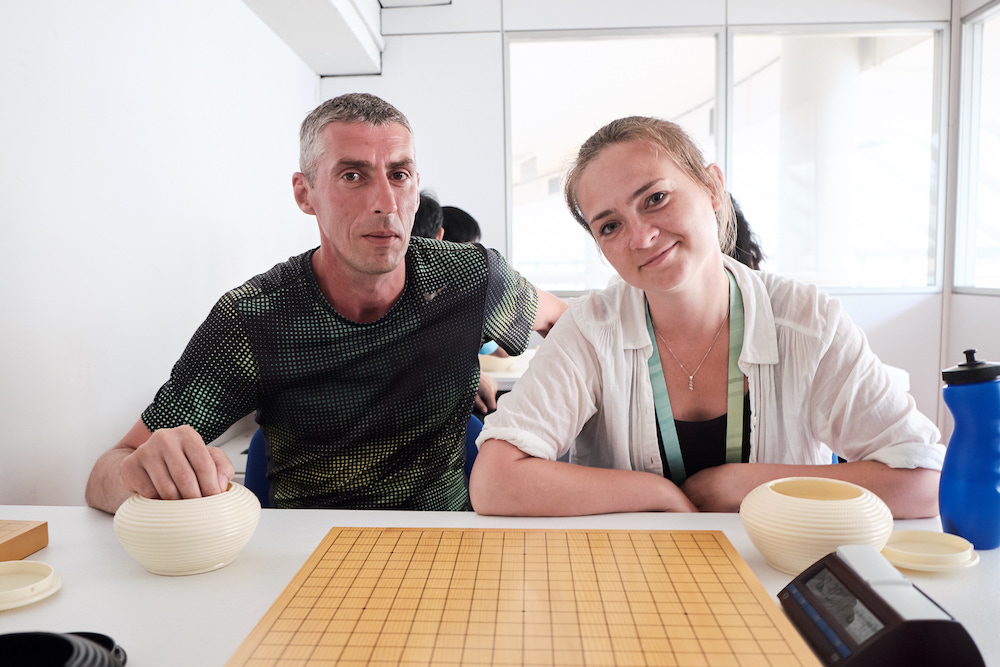 Dmitrij and Natalia at the pair go tournament of the EGC 2018 in Pisa, Italy. Photo by Mikhail Krylov

Natalia: Dmitrij and I are friends and have been playing together for fifteen years. It might be hard to call that training, but in my opinion, without friendship it’s practically impossible to play long and happily as a pair. Pair go is about mutual assistance and understanding between partners. It often happens that one of the players in a team is not doing well during the game. When that happens, their partner has to feel it and lend their shoulders to lean on, taking on more initiative and responsibility in the fight on the board. And, of course, it’s extremely important to enjoy playing together, which we always do!

Artem: Thank you for your time, Natalia! I hope you and Dmitrij continue your happy cooperation over and beyond the go board.